I want to preface this by saying that by no means am I ever offended or annoyed by any of these things being said to me! This is solely for laughs.

Since becoming a mother to twins almost 17 months ago I have become accustomed to feeling like there’s a spotlight on us whenever I’m out and about with my boys. Whether it’s the little old grandma or another mom out and about- the same questions always come flying at me…

OMG- ARE THEY TWINS?! Two babies exactly the same age who look very much alike…nope, what gave you that idea?

Are they identical? Not a simple answer actually. They were in separate sacs with their own placentas which generally points to being fraternal, but if the egg split early enough there’s a chance they’re identical and…hello are you still listening?

WOW, two for the price of one! Nothing about this has been cost effective, would you like to see my hospital bill as well as the amount of money spent on formula and diapers the first year?

Are they natural? Well sir, I know you’re not asking me to explain the birds and the bees here in the middle of the Ingles now are you…

Better you than me! With that attitude…you’re absolutely right.

A 20-something twin mama navigating through life. View all posts by Emily Sankuer 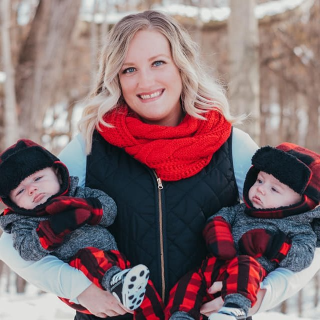 A 20-something twin mama navigating through life.

Take A Look Around

Stay Up To Date!

agrarian misadventures, feats of agricultural exaggeration, plus lessons from a hard-knocking tractor